Since its beginnings 20 years ago, the Technical Field Service (TFS) has undergone many changes, but the basic tasks have remained the same: The colleagues at the TFS look after IT workplaces in Germany.

The TFS arose from an IT outsourcing project in 1999, in which DATAGROUP took over the rollout in the cultural administration. In the course of this project, the wish emerged for a partner who could support IT workstations on site. The Technicasl Field Service was established. The range of tasks was broad from the very beginning and to this day covers the entire client lifecycle: from hardware procurement, installation, relaocation, adding, updating and modification of new software and hardware to the proper disposal (IMAC/RD). In addition, the TFS also handles the packaging of software and the sets up customer clients.

Service Technicial Gerhard Böhmler from Stuttgart was there from the very beginning and remembers: “We atarted with a rather small number of technicians who covered the entire range of tasks. Over the years, we have grown, looked after more and more workplaces and became increasingly specialised within the team. We currently look after around 50,000 workplaces from Leinfelden. But team spirit from those early days is still there, as well as the freedom to work your tasks independently.”

Cloning: From Van to Cloning Street

Some things have changed radically over the last 20 years. Cloning, i.e. the refuelling of end devices with the right software, is now carried out in the new premises in Leinfelden near Stuttgart via a modern cloning line. Up to 300 can be cloned in parallel and in 3-shift operation. A big difference from the beginnings. “We used to have a mobile cloning server in a van,” says Gerhard Böhmler. “We drove to the customer and could clone the devices in the car.”

A Success Story to this Day

Over time, the team grew, as did the number of workplaces supprted. Many custromers from the early days are still loyal to the TFS today or returned to the TFS after short interruptions. This growth is also reflected in the fact that in 2019, the team in Baden-Württemberg moved to new premises in Leinfelden near Stuttgart. On a storage area of more than 4,500m2 ther is space for the hardware for rollouts, repair processing and the spare parts warehouse for customers.

Christoph Voelter, Head of Technical Field Service about Leinfelden: “We can now dovetail the individual specialists much better: Logistics, cloning, roll-out and repair can work hand in hand, so customers don’t have to worry about their IT – it just works. 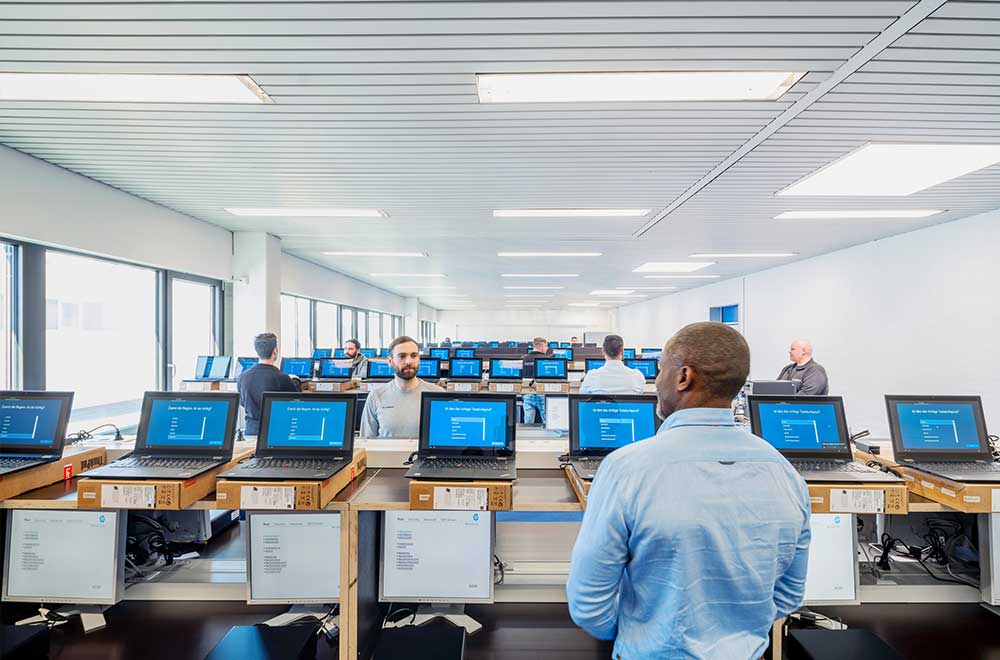 The Tasks of the Technical Field Service 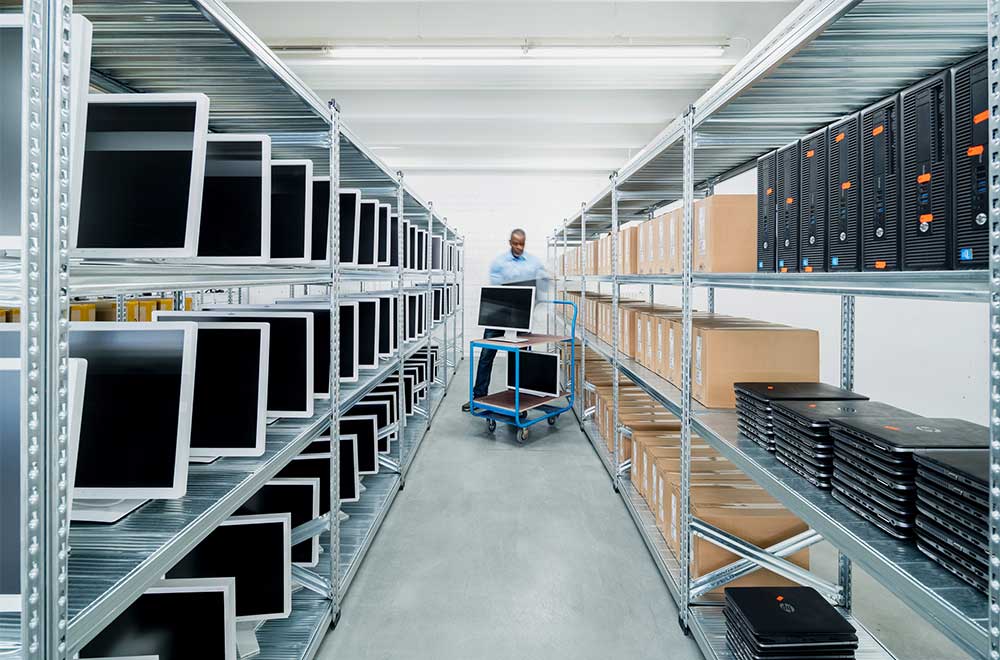 The Technical Field Service covers the entire client lifecycle, including order management and central dispatching, rollout and logistics and IMAC/D and Break & Fix. 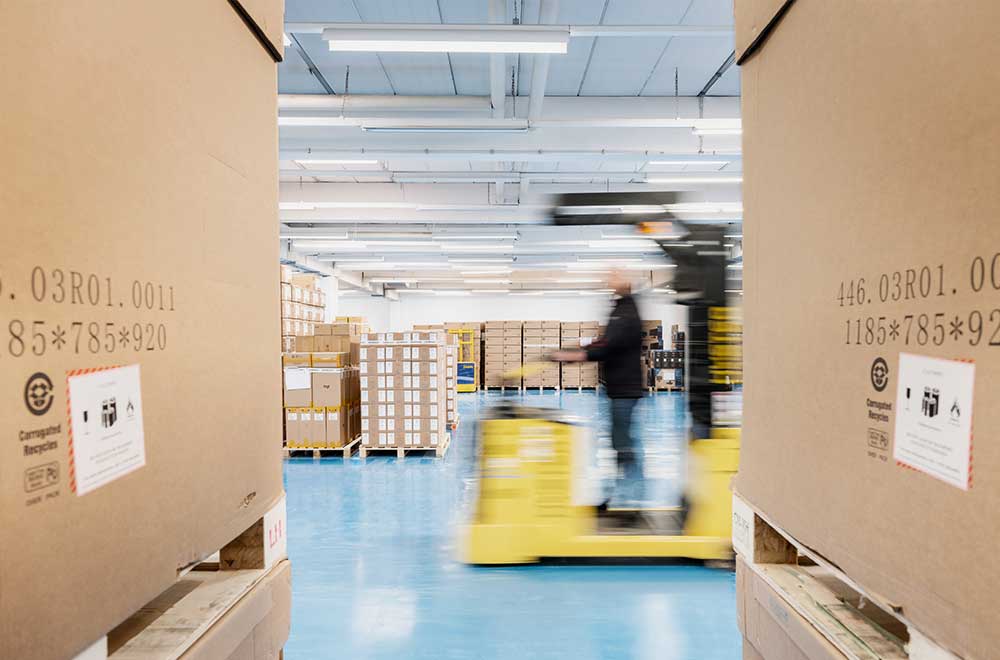 DATAGROUP manages logistics for the customer on about 4.500m2 storage space: from hardware procurement to rollout, certified according to ISO 27001.

In the Cloning Street at the Leinfelden site, up to 300 devices, including mobile devices such as iPads, can be installed simultaneously and in 3-shift operation with the right software. Parallel installation for different customers is also possible. 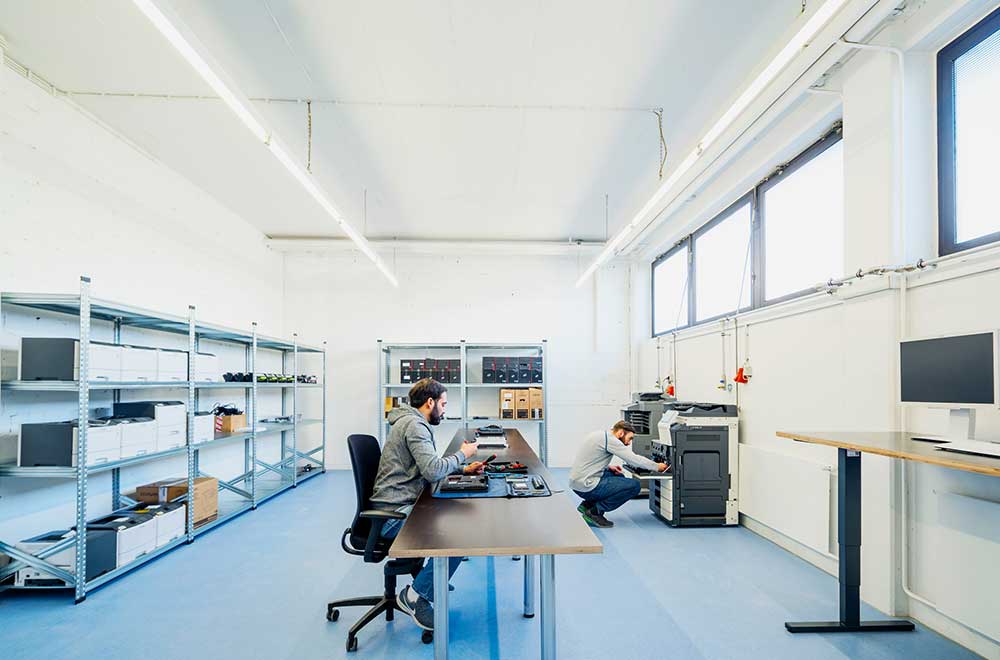 The Technical Field Service also takes care of warranty and repair for customers. This includes warranty processing with various manufacturers, our own repair of notebooks, printers and desktops as well as BSI-compliant deletion of old hardware.