From its beginnings as a small Swabian company in contract software development to a listed IT service provider active throughout Germany – DATAGROUP has reinvented itself again and again in the course of its more than 35-year history. An interview with founder and CEO Max H.-H. Schaber about the history of the company.

Why did you decide to start your own company?

Every entrepreneur is probably asked this question. I could never imagine permanently being an employee. After three years as an employee, the thought matured in me that I could do it better myself. The background was the possible self-determination and freedom!

The company was called Datapec at the time, in reference to the personal computers that had just come onto the market. The main focus of Datapec was custom software development. We solved problems individually for customers and wrote software based on different programming languages. We relatively quickly won very large clients such as Audi and AEG and employed about 100 people.

Where did the company go from there?

Overall, the company has reinvented itself several times. At first, the focus was on custom software. Then we developed a new business model. We became what is known as an incubator. We looked for people in the market who had already had success in IT, for example as managing directors or technical directors of software or trading companies. We offered them a platform to invest in newly founded companies for a small amount of money. Before the term existed in Germany, we had already developed a start-up culture. But unlike today, we took care of the infrastructure and all the things that are often a nuisance for founders. For example, payroll, dealing with banks, how marketing works, etc. We gave money and infrastructure and were very successful with it. In total, we have founded more than ten companies, some of which have become extraordinarily successful.

One of these companies was a trading company that, after only a few years, had a turnover of almost DM 100 million with branches in six countries. The company bought computers from the USA and sold them to universities in Europe via catalogs. We were thus one of the eCommerce precursor companies. We sold the company when hardware margins fell sharply.

After that, we dedicated ourselves to software development again, this time in the healthcare sector. As KIS (Krankenhaus Informationssysteme GmbH) we developed a Hospital Information System together with Hewlett Packard and Anderson Consulting. It was the first system based on a relational database. That was before Oracle came on the market. The novelty of it was that you were able to determine the real production costs in the hospital, that is, how much does a case cost. We had almost 100 employees, at that time already in Pliezhausen, 36 hospitals as customers and no outside investors. Due to changes in hospital financing, the hospitals were unsettled and stopped investing for a while. We then looked for a partner – much too late, in fact – and found one in Jenoptik. We found ourselves in a pressure situation that shifted the balance in favor of the buyer and we had to sell the company without making a big profit. It was a very bitter time in my entrepreneurial life.

However, you didn’t give up, but continued with DATAGROUP. How did that come about?

We already owned a number of companies that operated in the environment of today’s DATAGROUP. Through acquisitions, we formed a company with a system house focus. We went public with this company, from the outset with the aim of playing an active consolidation role on the market.

What made you decide to go public as a medium-sized Swabian company?

Raising capital. Through our experience with KIS and this bitter sale, we knew what it was like to run out of money. To prevent this from happening again, we put our financing on a broader footing. An IPO enables better capital procurement.

When did the change from system house to IT service provider occur? What were the reasons behind it?

Back when we went public, we made about 26 million euros in sales from the system house business. We made good money, but 80 % of our sales came from the trading business. I realized early on that the retail business would come under increasing pressure in terms of margins. That also became apparent when companies like Bechtle, Computacenter and Cancom focused on retail, got bigger and bigger and put more and more pressure on margins. They had a completely different weight with the manufacturers. I foresaw this pressure on margins and thought: We can’t continue to struggle along on two or three percent. We need a higher return, greater customer loyalty – I like to say stickiness here – and we have to become an indispensable, not easily replaceable part of our customers’ service provision.

We wanted to grow as an active consolidator in the market and at the same time transform our business from a trading-oriented to an exclusively service-oriented business. That wasn’t easy; I also had to assert myself a lot internally.

From this experience – what is important for change to succeed?

First and foremost, you need a goal, a vision: Where do you want to go? Changing for the sake of changing makes no sense. Change only makes sense in order to achieve a goal.

The second important point is a clear structure of how this change should proceed, i.e. what steps are necessary for it. Breaking down the vision into individual steps according to the motto: If you want to climb a mountain, do it step by step.

The third point, which I consider indispensable, is to keep at it. Review the strategy, review the goal, continuously improve, iteratively solve the issues. Today, we would say that you have to be agile.

What do you see as the biggest changes DATAGROUP has undergone in its 35-year history?

Most definitely the development of CORBOX. For the first time, we had a goal that everyone in the company could be committed to. We had a common language and a common product world that everyone could get behind.

What changes are currently underway at DATAGROUP?

The company is being partially recentralized from a purely fractal, i.e. distributed organization. This means that we are bundling services that can be centralized, such as HR, Finance or Data Center, in shared services centers via so-called change processes. The SQUARE project was one of these changes.

The IT industry is also characterized by change. Which trends will change the industry the most in the future?

You can certainly be described as a serial entrepreneur who lives and drives change. What does someone have to bring to the table for this?

I certainly have extreme stand-up qualities. By that I mean that I don’t give up. As an engineer, I certainly also have the ability to look at things in detail and then judge for myself whether I want to get in there. It’s the ability to be awake, to be interested. When my kids asked: What do we have to learn to be as successful as you, I’ve always said: You have to be able to stand going down ten times a day and getting up an eleventh time.

How do you see your time after DATAGROUP?

Currently, for my time after DATAGROUP, I am developing a group of civil engineering companies that lay the last mile fiber to the customer, i.e. communications infrastructure. Here I recently bought a company that will be the core of my buy and build strategy in the area. Also, again, I’m involved in the health care software area, but that all falls into the area where I’m an investor.

How do you see the future of DATAGROUP?

Of course, the entire economy is in a difficult situation right now. However, we are operating in exactly the right market segment, have a very good portfolio and excellent relationships with our customers. I therefore believe that we are only at the beginning of our great success. I therefore see the future of DATAGROUP as rosy, sunny, very successful.

Mr. Schaber, thank you very much for this interview! 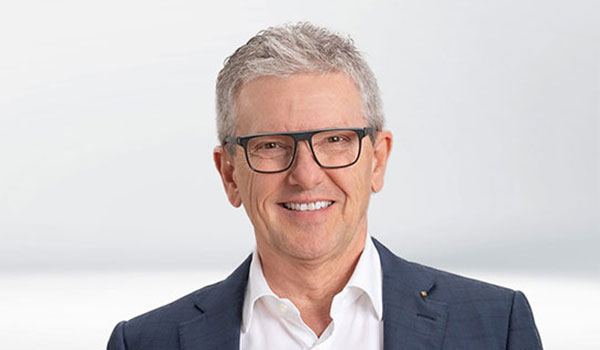